Continuing on our October theme for National Chiropractic Health Month, we’re going to take a look at our article published in the Journal of Upper Cervical Chiropractic Research this year.

If you’re interested in reading the entire article, we have a copy in our office. But if you want to skip pages and pages of technical jargon than this blog post is the read for you.

PTE stands for post-traumatic epilepsy.  By definition it’s recurring seizures starting more than one week following an injury to the brain. These injuries could come from a traumatic brain injury (TBI) or a brain operation.[1,2]

Who’s at risk? Those most likely to suffer brain injuries. Young males are the biggest category followed by children and the elderly. The rates of PTE following a TBI are as high as 86% but vary depending on the severity of the injury.[2] The good news, about half of all PTE patients experience 3 or fewer seizures and then go into spontaneous remission.[1]

Finally, post-traumatic epilepsy accounts for less than 10% of all epilepsy cases in the US.[2] It’s a small portion of the population that may end up with epilepsy following a brain injury but chiropractic care made the difference in this case.

The patient in this case was a 19-year-old male. While working, a nail gun slid off a roof and struck him in the head. A nail wasn’t shot into his head, but significant damage was done. He didn’t have any internal bleeding or a fracture but he had headaches, dizziness, and was disoriented.

He arrived in our office 6 months after the initial injury. At this time he was experiencing 2 to 3 seizures per day. During the examination there were numerous indications that the nerve signals between the brain and the body were being distorted in the upper cervical region. X-rays were taken to determine the exact misalignment of the bones of the neck.

His epilepsy started to improve following the upper cervical adjustments. The patient experienced only 4 seizures in the first month of care compared to an average of 2-3 per day before. After 11 months, he had no further episodes. 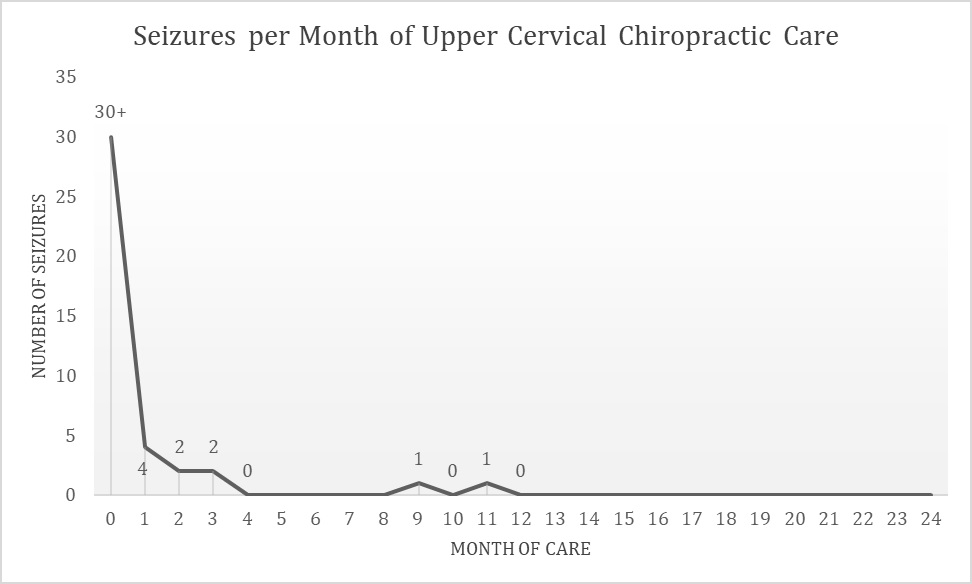 Why did this work?

In our paper we discussed how an adjustment could effect the nervous system in such a profound way. In essence, the upper cervical region, also known as the craniocervical junction (CCJ), is a complex area between your head and your neck. It houses the transition from the brain stem to the spinal cord with a multitude of small ligaments and muscles.

In this region, the nerve tracts that relay muscle tone information to the brain are vulnerable to distortions especially after significant trauma to the head and neck.[3] This could result in the seizures experienced by the patient.

However, this study is limited by the nature of a case report. It is not appropriate to apply this treatment approach to all PTE patients. Just because one patient had these results doesn’t mean everyone will.

Because of this, we also dug into the research on chiropractic, epilepsy, and seizures. There are some additional case studies as well as literature reviews that demonstrate improvement in epilepsy sufferers.[4-16] Notably, there were 4 other cases where a subject developed epilepsy after significant head trauma that improved with chiropractic care focusing on the upper cervical region.[6-8,13]

We’re always here to answer your questions. Please let us know if you have any or would like to know more about this study.

This blog provides general information and discussions about health and related subjects. The information and other content provided in this blog, or in any linked materials, are not intended and should not be construed as medical advice, nor is the information a substitute for professional medical expertise or treatment.

If you or any other person has a medical concern, you should consult with your health care provider or seek other professional medical treatment. Never disregard professional medical advice or delay in seeking it because of something that have read on this blog or in any linked materials. If you think you may have a medical emergency, call your doctor or emergency services immediately.